The Bunnies of the Bird World The Bunnies of the Bird World
Marji Beach, Education Director

Meeting Twiggy and her four romping friends, it is hard to believe that a week ago, they lived in individual wire cages, their babies stolen and slaughtered. They are five of twenty-eight rabbits saved from a farm phasing out its rabbit “meat” division.

Your gift of $15 today will help all five rabbits get spayed.

Rabbits are one of the most exploited species, in terms of ways humans utilize their bodies and skins. Their plush fur is stripped from their warm bodies after slaughter and sold to make coats and other fashion accessories. Many are used for vivisection. They are popular companion animals but regularly neglected and abandoned at shelters. And more than a million, like Twiggy, are slaughtered each year to supply restaurants or sold as companion animal food.

Is she a bunny or is she bird?

In the United States, rabbits are classified as birds. Yes, birds. Since chickens and turkeys are excluded from the two federal laws offering minimal protection to farmed animals, so are rabbits.

The most important one, the Humane Methods of Slaughter Act, requires protected species be rendered insensible to pain before being killed. The law excludes birds and rabbits, meaning more than 90% of all animals slaughtered in the United States are often killed fully conscious.

To be clear, there is no kind way to kill someone who wants to live and even protected species face horrific treatment and a needless death at the slaughterhouse.

And while some states do mandate inspection of dead rabbits, live rabbits are routinely handled and killed in heinous manners.

When Last Chance for Animals went undercover at Pel-Freez’s Arkansas slaughterhouse, the largest in the country, they found rampant abuse. Rabbits were routinely stunned improperly or not at all. Workers attached conscious rabbits to hanging hooks by forcefully breaking each rabbit’s leg to insert the hook. Instead of slicing the rabbit’s neck from the front, rabbits were decapitated with dull knives from behind, prolonging their suffering.

Inspection of rabbit slaughterhouses are voluntary and paid for by the owners themselves – there is no incentive to have United States Department of Agriculture (USDA) inspectors onsite. Even with inspections, many of the practices that occur at slaughterhouses are considered normal and routine and thus exempt from anti-cruelty laws.

And because inspection is voluntary, there are no accurate data on how many rabbits are killed. Numbers range from 1-3 million rabbits slaughtered in the United States.

Rush to save 28 lives

When Friends of Unwanted Rabbits were notified that a farm in northern California was phasing out its rabbit program, they rushed to find placement for the bunnies.

The farm refused to relinquish the babies to rescue. They were all killed and processed for “food.”

This left the parent rabbits – the male and female bunnies exploited for breeding. Twenty eight of them languished in individual wire cages, with no enrichment, no outdoor access, no life.

The average lifespan of a doe used for breeding is two years, while a male may be exploited for up to six. The babies are taken from their mom at 3-weeks-old and killed at 3-4 months old.

Animal Place was unable to take in all the rabbits, but we did offer safe haven for five. The others all found placement with other rescues.

With a complex social structure, introducing new rabbits can be challenging…the fur can literally fly.

So when the lucky five arrived to our rescue and adoption center, caregivers nervously opened each rabbit’s carrier door and crossed their fingers.

Turns out, we had nothing to fear! Despite living in cages by themselves for years all five seemed like best friends reunited.

The only evidence of the terror they faced can be found on each bunny’s ear – a tattoo pounded into their sensitive skin for identification. They are not numbers, though, they are Twiggy, Dickens, Checkers, Mitzie, and Celine. 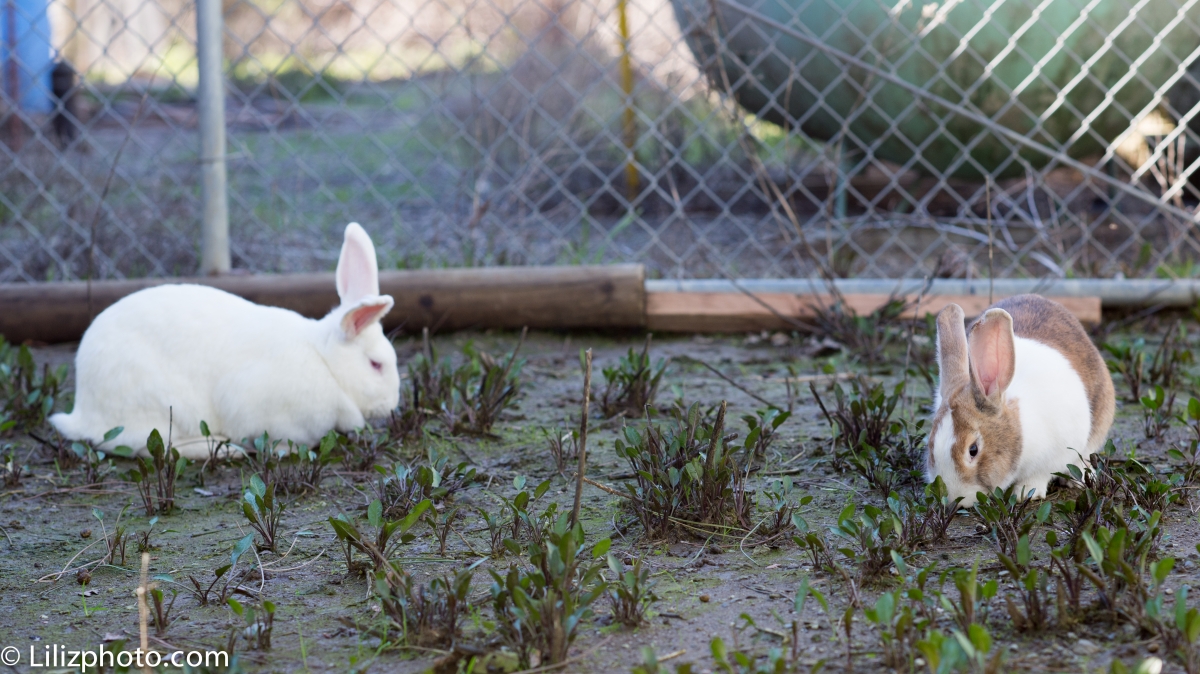